Johnny Depp on Being Weird

Alice Gets Some Tea

Mairi Ella Challen as Alice appears delighted as the Mad Hatter played by Johnny Depp pours her some tea. I like the mouse, though! Best part of the entire scene.

Here we go, with Johnny Depp going crazy with the dance moves.

A Couple of Sebastian Stan Photos

Here, for no particular reason, are a couple of cool photos that Sebastian Stan tweeted out on Instagram from his role in "Captain America: The Winter Soldier" in which he plays Bucky Barnes/The Winter Soldier.

Sebastian has a couple of films coming out in 2015, "The Bronze" and "The Martian," which should be killer.

Email ThisBlogThis!Share to TwitterShare to FacebookShare to Pinterest
Labels: Captain America: The Winter Soldier, Sebastian Stan, The Bronze, The Martian

It's Yo Ho Ho with Johnny Depp!

Walt Disney Studios has had an ad campaign going for the past seven years in which they use actors or other celebrities to portray film characters. Usually, the characters are animated ones, and you can see the others ones by clicking on the links at the bottom of the page. For instance, Scarlett Johansson played Cinderella, Taylor Swift played Rapunzel from "Tangled," Jessica Biel was photographed running through a forest as Pocahontas, and so on.

The photographs are very artsy in a kind of Disney-baroque fashion. Some say they look like oil paintings, but I think they look more like a skillful blending of real-life characters into an animated setting. In any event, they are all very tasteful and magnificent, and quite a number of them have quirky casting choices which give them a certain fascination beyond the headline celebrity. For instance, Lyle Lovett is shown as a companion of the Mad Hatter and Olympic swimmer Michael Phelps appears as a merman. Roger Federer rules the "court" as King Arthur.

Disney decided to include in the series some shots with Johnny Depp as his character Captain Jack Sparrow from "Pirates of the Caribbean." Why they felt they needed to do this, I don't know, since they already had plenty of promo pictures of Depp in the role and it isn't an animated character like all the others. But, when your movies earn the studio Billions of Dollars, you can set up a fancy photo shoot of your star celebrity whether you really need it or not.

In this shot from the Annie Leibovitz series of portraits for Disney, Johnny Depp stands romantically on a sail spar (that's what they're called, and why he'd be standing way up there I have no idea) as Captain Jack Sparrow. Depp is joined by his long-time friend, the legendary performer, writer and artist Patti Smith, as the Second Pirate in Command.

Obviously, these portraits of Depp are not that much of a stretch, considering he originated and owns the role of the rogue pirate (which, as Disney fans know, was a role derived from a theme park ride). Here, though, there is a slightly different take on the old buccaneer, as he is portrayed as a sort of romance novel figure, with soft lighting and a sentimental gaze into the distance. 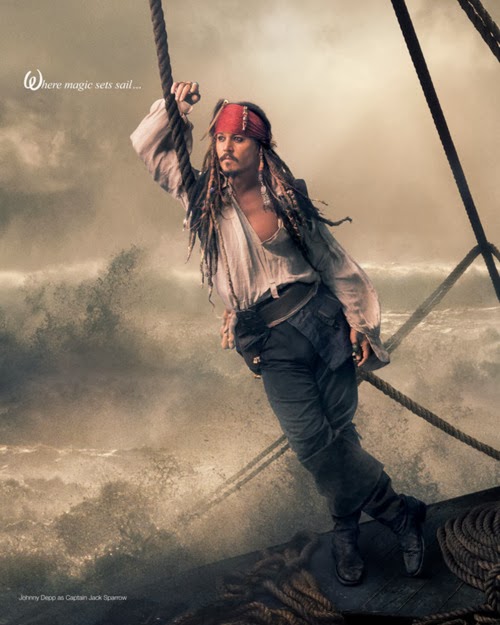 For all the actresses and actors in the series:

Do the Mad Hatter!

Hatters Gonna Hat - and what's wrong with that?
Posted by James Bjorkman at 10:44:00 AM No comments: